Born in Pinsk, Russia, Shoenberg studied mathematics, mechanical engineering, and electricity in Kiev. In 1905 he took a job designing and installing the earliest wireless stations in Russia.

In 1914 Shoenberg emigrated to London. There he joined the Marconi Wireless and Telegraph Company and soon became head of patents and then general manager. An enthusiast for music and sound recording, he moved to the Columbia Graphophone Company as general manager in 1928. Three years later, following a merger, the company assumed the name Electric and Musical Industries Ltd. (EMI). Shoenberg then became head of research and patents there.

Vladimir Zworykin, now working at RCA had decided to develop a new type of cathode ray pickup tube, one described in French and British patents of 1928 priority by Hungarian inventor, Kalman Tihanyi, whom RCA had approached in July 1930, after the publication of his patents in England and France. Tihanyi's tube, the "Radioskop" was a system characterized by an operation based on an entirely new principle, the principle of the accumulation and storage of charges during the entire time between picture repetitions.

According to Albert Abramson, RCA began experiments on these principles in April 1931, and after the achievement of the first promising experimental cameras, on October 23, 1931, it was decided: this new camera tube would be named "Iconoscope". At this time, EMI was still considering investing in the development of television but was unsure about taking such a risk. Being a patent expert, Shoenberg persuaded EMI management to fund a similar project, as development in England by the British firm EMI could also follow the original charge storage design. An excellent research and development team at EMI was quickly assembled by Shoenberg. His team succeeded in making their first electronic television picture-generating tubes in 1932. Schoenberg's team, Alan Dower Blumlein, J D McGee, and W F Tedham, initially secretly, managed to transmit a picture all-electronically across their laboratory. The picture was crude but, undeterred, Shoenberg and the EMI team continued with further research.

Between 1932–34, EMI's electronic television demonstrations were usually done in private and were proving relatively disappointing. The cameras were insensitive to light, and there were problems with secondary emission and 'tilt and bend' distortion. The EMI mirror-drum cameras, approaching 180 lines, still provided a superior picture to the electronic cameras. In early 1934, EMI joined forces with the Marconi Wireless and Telegraph Company (MWT) to form the Marconi-EMI Television Company. MWT engineers would be able to handle the transmitter side of the television system. The more significant advantage of the amalgamation however was that Shoenberg's team could use RCA's electronic television patents and other technology (including Zworykin's Iconoscope patents). By April, 1934 after further modifications Marconi-EMI's experimental camera was yielding vastly better pictures. They named their successful camera tube the "Emitron".

In May of 1934, the British Postmaster General appointed a television committee, made up of seven members of the Post Office and the BBC. They were instructed to "...consider the development of television and to advise the Postmaster General on the relative merits of the several systems and on the conditions under which any public service of television should be provided". Shoenberg suddenly committed the Marconi-EMI team to delivering a picture 405 lines, 50 frames per second, giving up drum scanners to exclusively use the all-electronic cameras. This was a huge and sudden leap ahead.

The Selsdon committee Report, issued on January 31, 1935 announced that there would be two competing systems of television for the London High-Definition TV service: Baird and Marconi-EMI, (chosen from a half dozen contenders). High-definition being defined as a minimum of 240 lines, 25 frames, which was the upper limit of the Baird system. The two systems were to run side by side for six months, on alternating days.

An application of Tihanyi's 1930 British patents in British broadcasting, rather than pure experimental use, would necessitate the legal purchase of these patents to avoid infringement. According to the Tihanyi website, "In early February 1935, "urgent" cables from RCA to Tihanyi indicate that company representatives arrived in Budapest for the signature of additional papers and that these were signed on February 15th". Tihanyi's British television patents now legally belonged to RCA (and Marconi-EMI). After the purchase, neither RCA nor Shoenberg credited Tihanyi or further acknowledged the purchase of Tihanyi's patents. Later that year, Marconi-EMI would publicly introduce their improved 405-line electronic television system with a frame rate of fifty pictures a second. 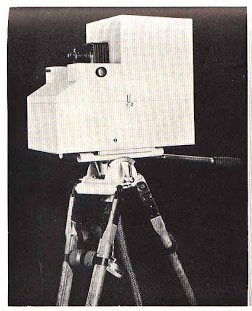 Shoenberg's team had also given their camera the title of the "Emitron" instead of calling it an "Iconoscope". Shoenberg went to great lengths to try to claim independent British invention of the "Emitron" camera, despite the fact that Marconi-EMI was owned in large part by RCA, there was a patent-sharing agreement, and other countries such as Germany, Holland, and Japan were working on their own versions of the Iconoscope. Shoenberg wrote "I wish to make it clear that the vision part of the Marconi-E.M.I. system" ... "has been entirely developed in this country by E.M.I., without any co-operation from the R.C.A."

However, David Sarnoff, President of RCA had earlier written that "The system employed is known abroad as the Marconi-E.M.I. Television System, which is fundamentally based on the R.C.A. Television System first developed in the R.C.A. Laboratories in the United States. Under an exchange of patent licenses, this British company may use R.C.A. patents in England, and in turn, R.C.A. and its American licensees may use British patents in the United States." Sarnoff had personally visited the Marconi-EMI laboratories and was on the original Board of Directors of EMI.

Shoenberg's American colleague, Vladimir Zworykin, had similarly written of his visit to England "EMI was building a television system for 240 lines with 25 pictures per second. The general system was very similar to ours, in fact it was almost an exact copy. The picture also compared favorably with our own."

On 2 November 1936 the BBC opened the world's first regular service of high-definition television from Alexandra Palace in North London. The Baird system, although comparable in picture quality, proved troublesome for actors, directors, and other staff to use in the studio, and after just two months the US-backed electronic system developed by Marconi-EMI was formally adopted.

The BBC television service developed rapidly between 1936 and 1939, but was suddenly halted on Sept. 1st, 1939 by the threat of WWII. Nonetheless, many ambitious outside broadcasts were made, including King George VI's coronation procession on May 12, 1937. This was seen on television by about 10,000 people. Other important landmarks include the first Wimbledon coverage in June of 1937.

Shoenberg became a director of EMI in 1955 and in 1962 was awarded a knighthood.